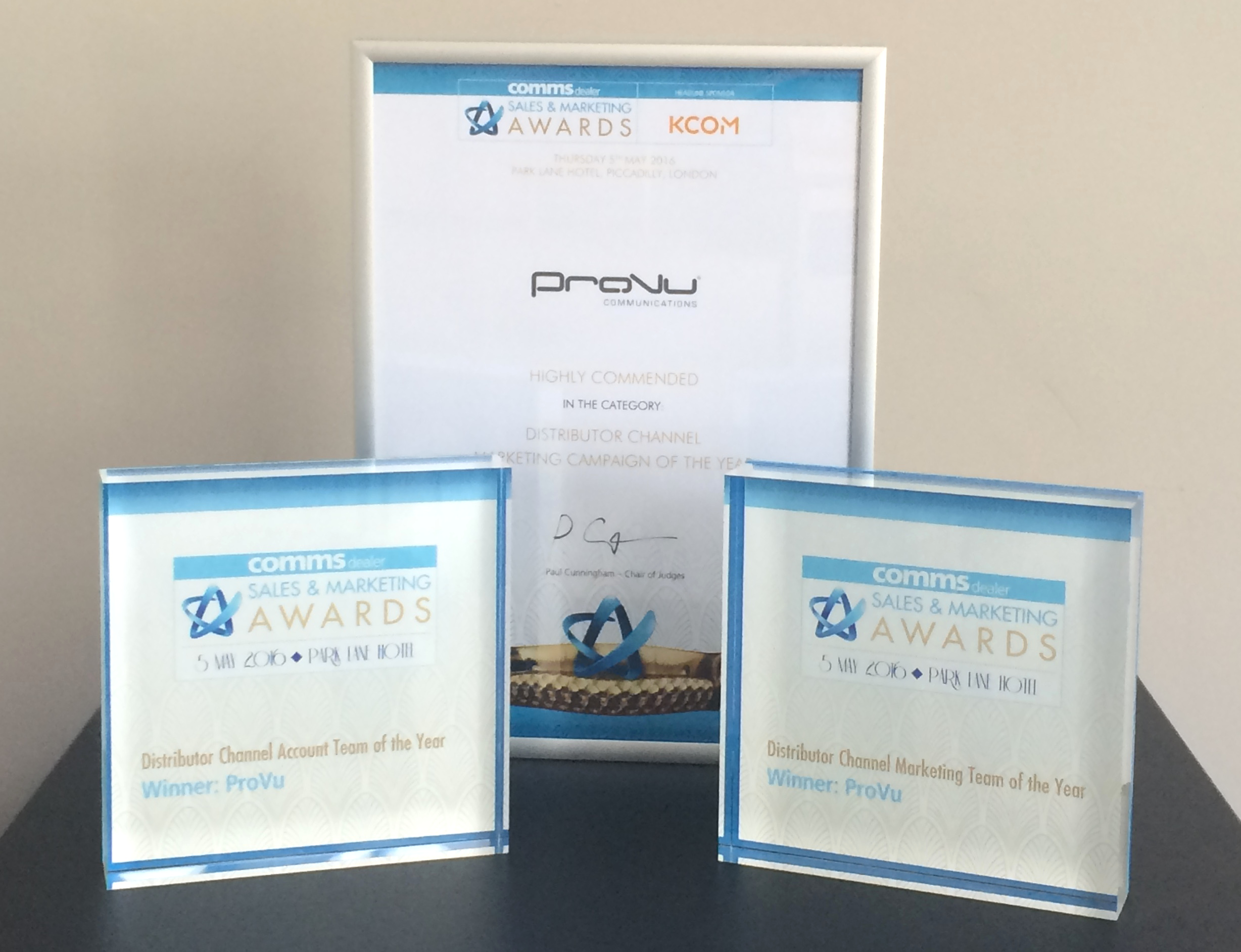 Last year our Sales Director, Ian Godfrey and I attended the Comms Dealer Sales and Marketing Awards for the first time. ProVu had been nominated for the Distributor Channel Account team of the Year, unfortunately we did not win but I had a moment of clarity whilst there; if we entered more award categories we would probably stand a better chance of winning an award. Not rocket science, I know but sometimes the obvious isn’t immediately clear.

Did I really think we stood a chance, to be honest no. ProVu is a very successful company that is growing at a pace, but we are still a minnow on the distribution landscape. The figures we talk about in our award submissions I am certain could be delivered by one department in a quarter for the larger distributors. On the plus side we are recognised as experts in our field with our fairly unique product mix and value added services. Was that going to be enough, we would have to wait and see.

So the big day came, Marketing Manager, Kate Stolworthy and Sales Account Manager, Anna Marzec-Smith and I travelled down to London to attend the awards. The awards took place at the Park Lane Hotel where we shared a table with our friends from Voiceflex and had a very pleasant lunch. The awards were hosted by sports presenter, Dan Walker of Football Focus Fame and latterly Breakfast TV. I have to say, he was good, he kept what was becoming a loud crowd in order with some great banter and put downs. He informed us that the hotel’s gents toilets had been part of the film set for the Bond film Casino Royale and then regaled us with a story of immense courage of a Japanese Gymnast called Shun Fujimoto (https://en.wikipedia.org/wiki/Shun_Fujimoto).

The Distributor category awards were the first to be announced. Much to my absolute surprise we won the first award for Channel Account Team of the Year. We went up on stage, grabbed the award, had our photo taken and I was a happy man – it had all been worthwhile. On the way back to my seat I came across various customers and vendors who were passing on their congratulations and were shaking my hand. I had literally just sat down when ProVu were called up again as winners of the Marketing Team of the Year award and we did the whole thing again. I was asked to say a few words this time on ProVu’s success, I waffled on for about 20 seconds and then the microphone was firmly, but politely taken from me. I cannot really remember what I said except that it was all down to the superb team at ProVu. By the time they announced the third category Dan teased us with the name of the winner beginning with a ‘P’, we didn’t manage the hat-trick, but we were named ‘Highly Commended’ in the Marketing Campaign of the Year Award, which was won by Pragma Distribution – congratulations to them! The remainder of the day passed in a flash of fun and laughter, we took a tactical call to extend on the celebrations and not return home that evening, returning to the office the next day and I am delighted to say still with our awards in hand.

So why did we win, there is clearly something to my law of averages theory, but I think ultimately you need good facts and figures that demonstrate a successful story. The successful story comes from having great staff that are dedicated to the company and make that success happen. It is also made a great deal easier if you have good vendors that support you and a great customer base who help you along the way. We are fortunate at ProVu to have all three of these elements.

So to everyone involved in ProVu’s success be it the great team at ProVu, our vendors or our customers I would like to express my sincerest thanks. 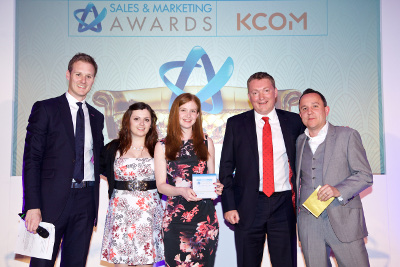 A few months ago ProVu were nominated along with 25 other companies for the Comms Business Distributor of the Year Award. ProVu have never really been involved in anything like this before and there was a ripple of excitement around the office when we were nominated. We decided that we should ask our customers if they would be kind enough to vote for us to give us the best shot of being short listed for the award. Unlike most of the awards at this event the winner is decided by a readers vote and not by a panel of judges.

I have to say I was extremely sceptical about our chances of winning. If you do not know, ProVu are a niche distribution house specialising in VoIP and although we are successful and growing we are a relatively small company compared to some of the fellow entrants for the award. Because of our size I felt it was an extremely long shot for us to be able to out gun the competition on customer votes.

To our surprise and delight a few weeks ago we found out we had been short listed into the finals along with 4 other distributors. There was much talk in the office about what are chances were and who was going to get to go to the awards to see Jimmy Carr! I was working out the best way of leveraging any PR we could make out of being short listed. I think at one point I said to the team; we have only a few weeks to make the most out of this news as when someone else wins it will be very old news.

So on Thursday evening last week, Ian Godfrey (ProVu Founder and Sales Director) and I were sat in the ball room of the Lancaster Hotel in London for the awards. Much to the disappointment of some of the team we had pulled rank and decided we were going. For both of us it was our first time at the awards, I was a little surprised at the scale of the event, there was a lot of people in the room and it looked just like the type of awards ceremony you see on the TV, with big screens, auto cues, a camera crew etc etc. We had a great meal, Jimmy Carr did a great set and then we won, for those sat on our table they can probably verify that it was a bit of a surprise. The rest of the night was a bit of a blur, but we managed to get the trophy back to the office the next day and raise a glass with the team.

I have spent the weekend mulling over how we could have possibly won and I have come to a rather pleasing conclusion and that is we must care very much about our customers and in return they care enough about us to make this award happen for us, which makes me very happy indeed.

I did not get the chance to make a speech when we picked up our awards and so I have chosen this blog post as the vehicle for my thanks, so:

To the ProVu Team I would say a huge thanks for all your commitment, dedication and hard work and if this award teaches us one thing it is to remember our business is all about the customers, because without them we would be nowhere. So please keep it up.

To our customers I would just like to say – Thank you, we are very grateful.