Explore how 2N’s Contactless solutions can help to keep your business and customers safe as the world begins to return to normality.

As the world begins to return to some form of normality, we are beginning to see people become a little more careful when it comes to interacting with businesses and products. To combat this social wariness, 2N offers the perfect products to take additional steps to keep not only your customers safe but also your staff. From the New 2N Indoor View touchscreen answering unit, to the zero-touch Bluetooth Verso Module, 2N has plenty of extraordinary devices to make your workspace safe and secure.

Delve into the IP Force

If you are interested in more of 2N’s products as well as seeing them in situ. Check out 2N’s Virtual Experience and explore 2N products in a 3D space.

2N’s popular Verso intercom is now available to purchase in black! This sleek new design offers users more choice and style to create the intercom they require, in a finish that suits their individual installation environment.

Developed as a modular system, the Verso can be fully customised to meet the needs of virtually any door entry scenario, including the newly launched Bluetooth, touch display and induction loop modules.

You are out of the office and only have access to E-mails but you still want to be notified when someone is at the front door. Creating this simple automation will allow you to receive an E-mail with the time and date of when someone presses the button on the 2N Verso. You can also get it to send you a picture of who it is that pressed the button.

Go on the 2N web-interface and go to Services (Purple tile) > Automation, from this page you will need to tick the box “Function Enabled” and fill in the “Object Type” and “Parameters” as seen below:

Event=1; Sender=2nVerso@frontdoor.com; Email=YourEmailAdress; Subject=Someone has tried calling you; (Subject can be changed to say what you want)

Go to the “E-Mail” tab, this is were you will need to put your smtp server address along with your email address and password. If you are using your gmail account then the smtp server and port are most likely going to be as follows:

For more information about the smtp server settings go to this page: https://wiki.2n.cz/hip/conf/latest/en/5-konfigurace-interkomu/5-4-sluzby/5-4-4-e-mail

You have now finished, you can now test this feature by pressing the intercom button and watch your inbox for the email to come through, as shown below: 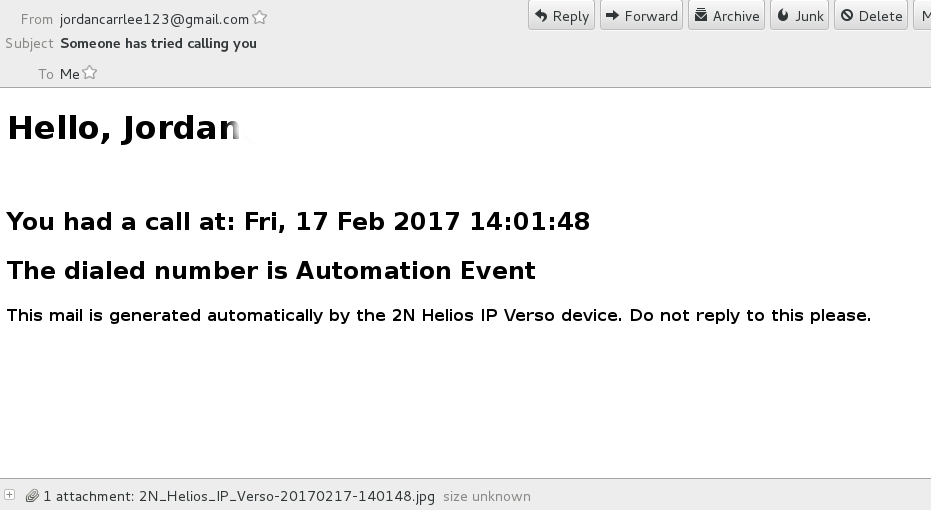 If you have any issue please contact our support team.

We have had an enquiry come in about how to wire in a tamper switch without an I/O module or a Wiegand module. I must admit I thought this was strange at first, given that I always thought it was fairly simple to do. It turns out it is but it is also easy to overcomplicate.

Make no mistake that 2N’s ideal setup would be a tamper switch connected to either an I/O module or a Wiegand module – every single piece of documentation I have found shows it connected in this manner. The idea is that it has 2 switches – we’ll call them switch 1 and 2 – with switch 2 connecting to the I/O module and back into the Verso, where it is recognised as a tamper switch, and switch 1 connecting to, for example, a 3rd-party alarm system, where it is recognised as a generic input that activates whatever the alarm system is programmed to activate.

The Verso however has its own generic input, into which you can wire switch 1 and have it behave as exactly that – a generic input.

Please note: in order to make use of a tamper switch in any way, you must have at least the Enhanced Integration Licence.

What you will need:

The tamper switch then needs wiring in via that little green terminal block on the left:

As mentioned earlier, because of the way it’s wired in, the Verso doesn’t know it is communicating with its own tamper switch, so the below is what you’ll see in the web interface when you try and program it as a tamper switch:

To run a quick demo of it working, I told the Verso that its Secured State Control was controlled by the status of input 1 – all this does short of any programming is activate a red LED next to the camera in the shape of a padlock – without the Enhanced Integration Licence this is all it will be able to do.

By using a screwdriver to press and depress the tamper switch, I was then able to turn the red LED on and off.

Please note: If you are using a tamper switch in this way you will not be able to wire anything else, such as an exit button, into the same input on the Verso. The only way to use an exit button without buying an I/O module will be to buy a security relay.